Is it a Northern Winter Moth or is it a Winter Moth?  Or is it a November Moth? Or perhaps a Pale November Moth?  I could try searching for the wingless female (of whichever species it is) in the dark tonight and that might help with identification. I did catch sight of one female on the trunk of an apple tree one squally night, but it had disappeared when I returned with a camera.  All of these species are so very similar to each other and all fly quite weakly - sadly no dodging the traffic on the country lanes.

The scientific name is also a little jumbled and out of the ordinary.  The Operophtera is a typographical error for Oporophtera (opero : fruit and phtheiro : to destroy) and refers to the damage done to fruit trees caused by the larvae.  I'll send a photograph to Charlie Fletcher and see if he can identify it - if he can I think it will be a new species. 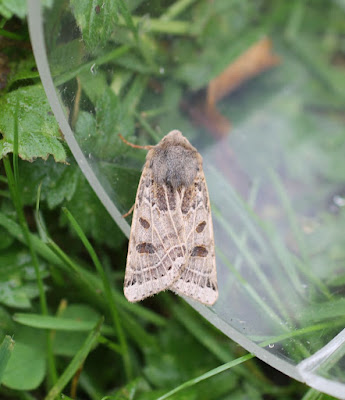 The Lunar Underwing is another variable species but the one in the photograph helpfully displays particularly clear markings.  In the Shandy Hall gardens the tendency is for the ground cover of the forewings of this species to be darker than the soft brown seen above. In the trap there were others with reddish and yellowish ground colours and the two clear marks on each forewing not so sharply defined. It seems the diagnostic marking is on the (invisible) hindwing where a crescent shape is to be found.  How one gets to see this is another matter.

As rich a green as pea soup is the Red-green Carpet (Chloroclysta siterata) and this one must be freshly emerged from its pupa.  The scientific name means 'the washed-away, greenish yellow of corn' as the green colour soon loses its brilliance.  I can't see any red in this moth... Perhaps it is an Autumn Green Carpet (Chloroclysta miata)?  But that species is uncommon in North Yorkshire tends to be found on uplands.  From photographs found online, all examples have markings that are sprinkled over the wings and have less of a block of colour.